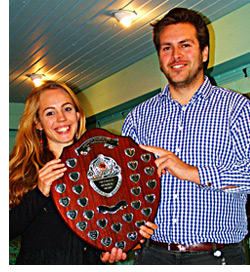 AN expert in sustainable orchards has been recognised for making an outstanding contribution to the cider industry.

Emily Durrant, project manager of the Herefordshire Orchards Networks of Excellence (HONE) project, has been awarded the Fred Beech trophy in recognition of her efforts to encourage sustainable practices across the UK. The award, handed out each year by the National Association of Cider Makers (NACM), acknowledges a significant contribution from one individual over the course of the previous year.
Durrant has been with HONE since late last year and regularly organises workshops that cover a range of topics affecting cider apple growers.
Richard Heathcote, chair of the sustainable futures committee of the NACM, described Durrant as one of the industry’s “bright young stars”. “The future of the country’s orchards will depend on the quality of people who get involved in the industry and in just a few short years Emily has made a huge impact and very significant contribution to the cider apple orchards of the future,” he said.