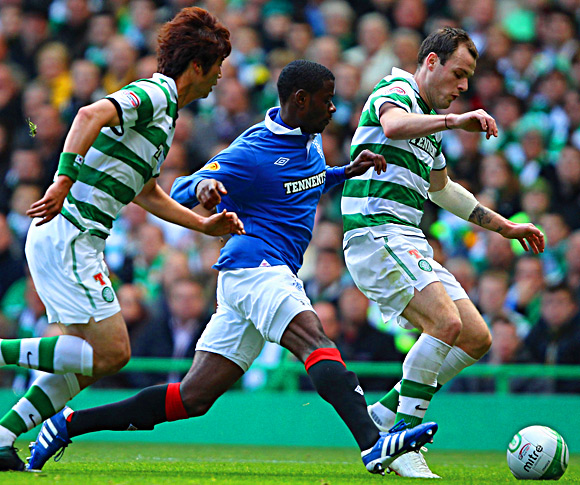 GLASGOW’S football giants hit the front pages again recently – and there could be ramifications for the pub trade.

According to reports, police have upped the ante in their campaign for matches between Rangers and Celtic to be switched from Sunday lunchtimes to midweek.
It comes after crime figures showed 142 incidents of domestic abuse were reported the day the sides met at Ibrox last month – more than double what’s normally expected on non-Old Firm weekends.
For the police, it’s a no-brainer: the incidence of crime rises every time these ancient rivals meet, much of it fuelled by alcohol, and by moving the match to midweek, when fans would presumably have less time to drink, it’s said there wouldn’t be the same spike in crime.
The clubs and the SPL are said to be angry, and complain there’s only so much they can be blamed for crime committed in the streets and in homes.
But how would the trade fare if the game moved from Sunday lunchtime to, say, a Monday or Wednesday evening?
Until now, I have tended to side with the SLTA on the issue.
The licensees’ group is all in favour of a quieter, midweek slot, stating it makes sense from an alcohol misuse perspective (the Sunday lunchtime fixture gives fans the rest of the day to drink, should they be inclined) and from a trading standpoint – many publicans also just don’t want the hassle of dealing with the fall-out of a pumped up Old Firm crowd.
The logic is compelling, but there is another side to the story for the trade.
One Glasgow licensee recently remarked that the Old Firm games were highly prized from a commercial point of view due to the crowds they pull in. And I have to say I see the point – there aren’t many events which have people flocking to pubs in their droves these days.
For hard-pressed pubs, the takings from an Old Firm match day might just be enough to keep them afloat – no matter the unwelcome issues the fixture sometimes brings – and moving it to midweek could diminish the commercial benefits.
That said, so fiercely loyal are many fans I imagine they would watch it in the pub no matter when the games are on (assuming the kick-off falls within licensing hours).
No doubt the issue will continue to be hotly debated as the snappily-titled Offensive Behaviour at Football and Threatening Communications (Scotland) Bill progresses through parliament (see below). There is also speculation that pubs and off-sales stores forced to limit trading hours on match days, though this suggestion has also met with opposition over how practical it will be to enforce and how fair it is on legitimate businesses.
This is one debate that seems destined for extra time.