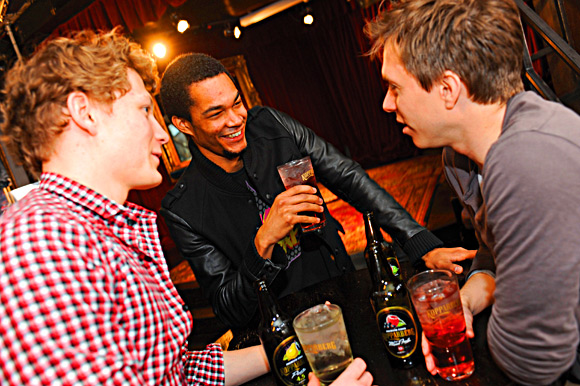 The raft of new bottled brands and variants launched in the last couple of years means there’s no shortage of options when it comes to stocking the back-bar fridge.
But with so many to choose from, where do licensees start?
Davin Nugent, managing director of COS Brands, which distributes Kopparberg fruit cider in the UK, admits the range of bottled ciders available can make choosing which brands and styles to stock a daunting prospect for operators.
“There are lots of brands out there and you can’t stock them all – shelf space isn’t elastic,” he told SLTN.
“Choosing what to stock isn’t easy but I think cider is now like beer – it’s right and proper to have multiple brands.
“When we launched Kopparberg six years ago, it was very much an apple cider market and we wanted to develop a fruit cider market in the UK.
“We wanted to widen the category – it wasn’t a case of coming in and stealing Magners’ consumers.
“Kopparberg is such a different drink to British and Irish ciders. It is much sweeter and I think that has struck a chord with Scottish consumers.
“There’s definitely room for Kopparberg pear alongside, say, Magners pear and Kopparberg fruit alongside Jacques. Fruit cider is doing incredibly well and Kopparberg is up 70% on last year [in volume terms in the Scottish on-trade].”
The fruit cider category might be considered pretty buoyant, but Nugent reckons there’s a limit to the number of variants the market can handle.
For that reason, he said Kopparberg will maintain its core range of flavours – pear, mixed fruit, strawberry and lime, and elderflower and lime – enhanced with two seasonal variants: raspberry and mint, the inaugural seasonal flavour which was available during the summer months; and the new cranberry and cinnamon variant, which has just been launched ahead of Christmas.
“In Sweden and Finland, we have multiple flavours of Kopparberg but that is the market there; here it’s about balance,” added Nugent.
“The seasonal variants are a way for us to introduce new flavours but limit it at the same time. The seasons are having less impact on cider. Summer will have its peaks but Kopparberg is a year-round drink – our winter seasonal variant demonstrates that.”