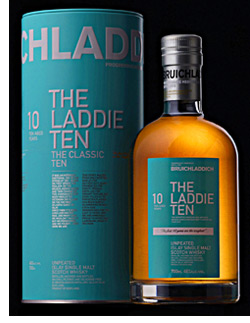 ISLAY distillery Bruichladdich has signed a new funding deal which it claims will enable it to significantly expand its production facilities.

The deal with HSBC, said to be worth several million pounds, will allow the distillery to borrow more money than it previously could.
Mark Reynier, managing director of Bruichladdich, said the agreement comes at “a pivotal time” for the distillery.
“This investment will allow us to expand, fuelling sales both in export markets and at home,” said Reynier.
“It’s fantastic to see the past ten years’ hard work and investment come to fruition and I’m confident that HSBC’s international expertise, transparency and encouragement will allow the distillery to produce quality Scottish malts for many more years to come.”
Bruichladdich was closed in 1994 and re-opened in 2000 when it was bought by a consortium that included Reynier as well as Sir John Mactaggart and several private investors.
The distillery recently launched its first ten year old whisky, The Laddie Ten.
Mark Tate, head of commercial banking in Scotland, for HSBC, described the Bruichladdich distillery as “a thriving business, in a growing and important sector for the Scottish economy”.
“Having spent considerable time at the distillery, gaining an insight into the very special culture of the team on Islay, we have been able to understand the business’s needs first-hand and structure a package to help the company expand to the next level whilst developing further into overseas markets,” he said.