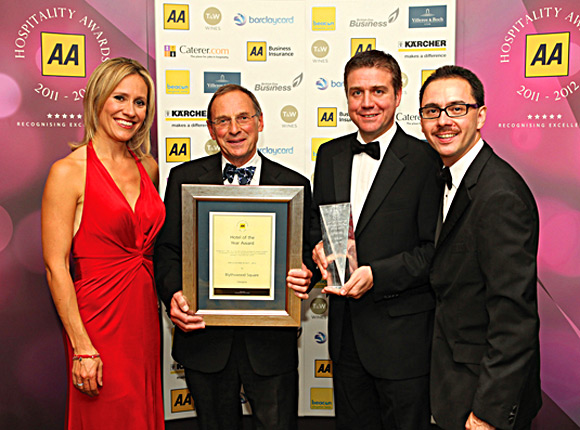 Gleneagles chairman Peter Lederer, who has worked in the industry for more than 40 years, was presented with the Lifetime Achievement gong at the 2011 AA Hospitality Awards, hosted by BBC newsreader Sophie Raworth at the London Hilton on Park Lane.
Lederer, who first joined Gleneagles in 1984 as general manager, was recognised for his “significant contribution” to the hospitality industry.
Gordon’s Restaurant in the Angus village of Inverkeilor took the award for Restaurant of the Year, Scotland.
The family-owned restaurant, located in a converted 19th century house, was praised for its modern cooking with a classical theme.
The business has been run by Gordon Watson and wife Maria for the past 25 years, and son Garry, who has worked in the kitchen for the past 15 years.
Maria told SLTN the award is good for the local area as well as the restaurant itself.
“This part of the world does seem to get left out a bit,” she said.
“We’ve been running this for a lot of years and we know that people have travelled to us and appreciated the food. They’ve travelled from places where they have their own restaurants giving them good food and good service but they’ve come the extra miles to visit our restaurant because of what we do. So it’s fantastic that the area’s been recognised as well as ourselves.”
The five-star Blythswood Square in Glasgow was named Best Hotel, Scotland, with AA hotel services manager Simon Numphud describing it as “a stunning new addition to the hotel scene in Glasgow”.
Peter Taylor, chairman of the Town House Collection, owner of the five-star property, said the award was a fitting way to mark the hotel’s first anniversary.
“This is a true testament to the skill, dedication and hard work of the team and to the support that we have enjoyed from all our customers and guests since we opened our doors,” he said.
In Edinburgh, Café Royal was named Pub of the Year, Scotland, impressing the AA with its blend of traditional pub and fine seafood.
And Rhubarb, the restaurant at five-star Edinburgh hotel Prestonfield, picked up the Wine Award, Scotland.
As well as the awards, several Scottish restaurants were awarded AA Rosettes on the night.
The restaurant at Glenapp Castle Hotel in Ayrshire gained four rosettes – the latest in a string of accolades for the hotel since the appointment of head chef Adam Stokes in 2008.
Fay Cowan, who runs the hotel with husband Graham, said: “We’re delighted that Adam and his team have received this tremendous recognition for the excellence of their food and service in our fine dining restaurant.
“Achieving four AA Rosettes is no small feat and is the culmination of a series of detailed inspections over a number of years.”
The restaurant at Roman Camp Country House Hotel in Callander was awarded three Rosettes, with the hotel taking a Red Star for its facilities.
It is the fourteenth year in a row that Roman Camp has secured three rosettes.