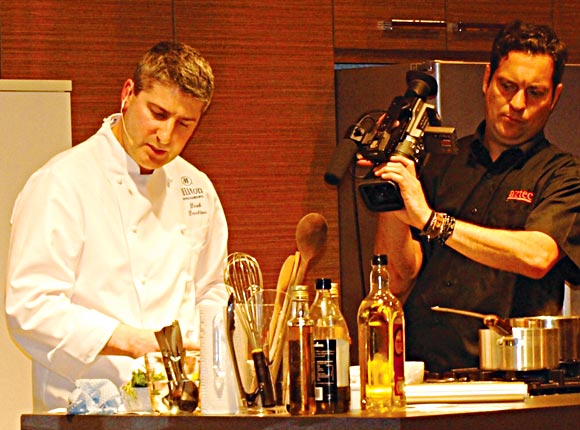 A GLASGOW chef is preparing to compete against some of the best in the UK as he battles to become the Visionary Dining Chef of the Year.

Derek Donaldson, head chef at the Glasgow Hilton, will compete against ten other chefs from across the UK at an event in Kendal next month.
The competitors will be tasked with creating an eleven-course, £125-per-head meal, with the winner voted by a judging panel including celebrity chef Monica Galetti.
Each of the chefs will be mentored throughout the event by a Michelin-starred or AA Rosette chef.
Donaldson’s mentor will be Scottish chef Allan Irwin, who is now head chef at Lujon in Kent.
Both Irwin and Donaldson are originally from Linwood in Renfrewshire.
“Our chef of the year will be someone who shows a natural culinary vision,” said Gordon Cartwright, managing director of Visionary Dining and a Michelin-starred chef himself.
“We are looking for the use of clear natural vibrant flavours, flawless textures and high levels of intuitive skill.
“The winning dish will provide an ultimately memorable ‘wow’ factor.”
The event will take place at the Lakes Hotel School in Kendal on October 20, and is being staged in support of hospitality industry charity Hospitality Action.

Image: Hilton head chef Derek Donaldson is heading to the Lakes to compete for the title.