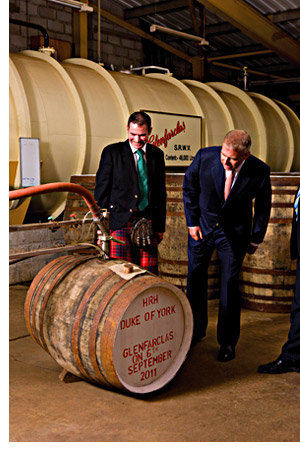 THE Duke of York was on the Scotch whisky trail last month.

His Royal Highness dropped by the Glenfarclas distillery in Speyside as part of celebrations marking its 175th anniversary, before heading to Livingston to open a new, state of the art bottling line for Glenmorangie.
The Duke was given the Glenfarclas tour by production manager Shane Fraser, and also met the distillery’s longest-serving employee, mashman Alistair Miller, who joined in 1972. And 14 years after he visited the Glenmorangie distillery in Tain, Ross-shire, when a special cask was laid down in his name, the whisky was bottled as a Special Reserve when HRH performed official opening duties at the new facility.
Glenmorangie, owned by luxury goods business LVMH, presented 270 bottles to the Duke, which will go to his chosen charities for auction.