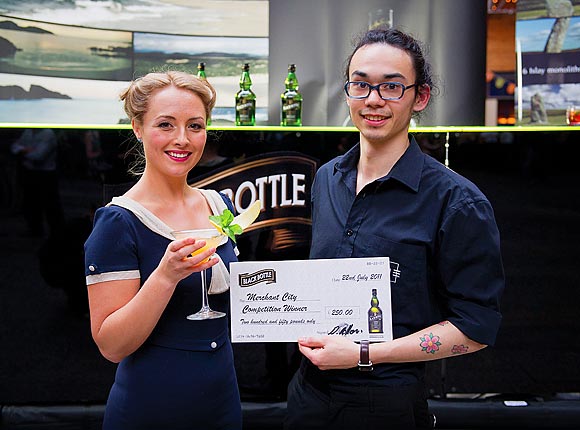 IT was a home win for Glasgow bar Metropolitan last week as bartender Aska Hayakawa triumphed in the first ever Black Bottle Merchant City Festival Cocktail Challenge.
Aska was one of five mixologists invited by Burn Stewart Distillers to take part in the event, held in the indoor Merchant Square that’s home to Metropolitan and other bars.
Compering the event was River City star Reanne Farley, with the cocktails judged by SLTN’s Scott Wright and journalists Rebecca Gray from The Herald and Evening Times and Caroline Witham from Foodies magazine.
The bartenders were tasked to create two original cocktails based on Black Bottle, and judged on their presentation skills and on the taste, aroma and appearance of their drinks. And coming out on top with the highest points total was Metropolitan’s Aska, who walked off with £250 for his two creations: Express Yourself – an imaginative combination of Black Bottle, Port, espresso, gomme syrup and double cream; and My Name is Earl – Black Bottle, lemon juice, honey, peach puree and Earl Grey tea.
Black Bottle’s David Allan said the standard of entries was high. “The competition also highlights the fact you can be adventurous when thinking about a whisky cocktail and Black Bottle brings something different to the party,” he said.
Allan said he hopes to open the event up to bartenders outside the Merchant City in future.

(Image: River City’s Reanne Farley raises a glass to Aska with one of his winning cocktails.)