TAKING the decision to be more energy efficient is more about cash than conscience for a lot of pubs, but for one Edinburgh licensee the drive to save energy is about more than pinching pennies.
Graham Blaikie, landlord of The Mercat Bar in Edinburgh, is on a mission to make his business more environmentally friendly. “I like to think that I’m looking to the future, not just for myself, and I think we all need to do our bit for the environment,” Graham told SLTN. 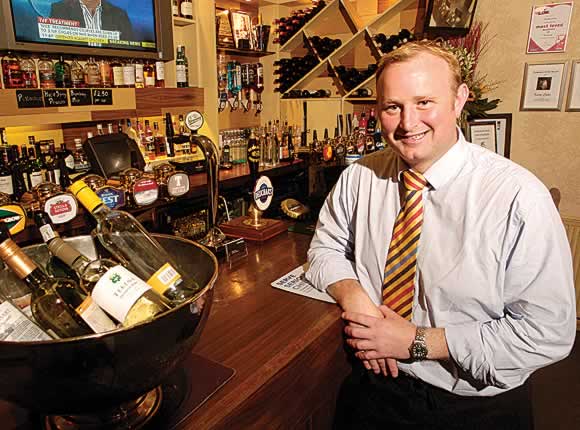 He took the first steps last year by switching to energy-saving bulbs and adopting simple staff practices such as turning off lights and appliances, as well as planting a number of trees to offset the pub’s carbon emissions. This was followed by the introduction of sensors, which can cut power when a particular space is empty.
Blaikie said that the extractor fans in the toilets are an example of this technology in action, with the sensors ensuring they will only be activated when someone is in the toilets.
A further refurbishment of the bar will include even more energy-saving measures, including shut-off switches for fridges in The Mercat’s bottom bar, and a significant investment in LED lighting. He has been advised on energy-saving measures by a friend, a consultant who has been working with Belhaven (Graham’s landlord at The Mercat) to advise on making the company’s estate more energy efficient. The measures won’t come cheap, with the bill for the LED lighting alone running to £13,000, but in the long run should provide savings.
“The initial outlay is a lot of money, however you’re never going to have to change the lightbulbs for the rest of your life,” said Graham. “These things last for 25,000 hours.”
And the efforts so far have not gone unnoticed. Late last year environmental activist group 350.org staged a ‘Carrotmob’ event at The Mercat in recognition of its environmental initiatives. Positioned as the opposite of a boycott, a Carrotmob event sees campaigners turn up en masse to endorse a business by spending money.
The Mercat refurbishment is only part of Blaikie’s energy-saving story, however.
As well as planting more trees this year the publican is also looking to invest in a new venture. This time, the goal will be to become totally carbon-neutral, with initiatives that include ground source heat pumps (which harness heat energy from the ground and use it to heat radiators and water) and solar panels.
“This is a whole different level,” said Graham. “You’re really stepping up to the premier league here. This is the kind of stuff that you’ll pay the money out and it will take twelve-to-fifteen years to bring the money back in. But when you’re buying a premises it’s not a hit and run.”
Yet despite his own dedication to the cause Graham said he sympathises with publicans who are reluctant to invest in energy-saving systems.

I like to think I’m looking to the future, not just for myself. We all need to do our bit for the environment.

The trade, he said, “gets pounded by so many policies and procedures” that further investment is not always a top priority. However, with energy bills rising, he advised other publicans to keep an open mind about energy efficiency. “It’s soul-destroying, and it’s only going to get worse with the gas prices rising, the electricity prices rising. A lot of us have got these bloody big pubs, so why not stick some solar panels on the roofs? “You need to be self-sufficient. You look at the number of businesses and the amount of energy we’re all using on a daily basis, I only think we can sustain it for so much longer.”