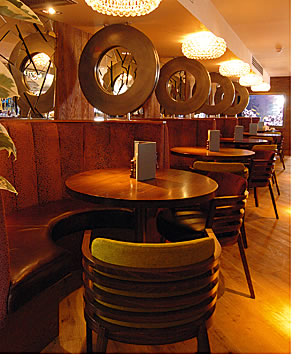 AS the rain lashes against the large picture windows framing the view of the Isle of Cumbrae, it’s difficult to believe it’s midsummer. But not even the miserable weather can dampen the spirits of Colin and Kenny Blair. The brothers who, together with sister Alison, run Buzzworks Holdings have just launched the sixth venue in their portfolio – Scotts at Largs Yacht Haven.
At a time when many operators are putting refurbishments and venue launches on hold, Buzzworks has ploughed a claimed £900,000 into revamping the former Regattas outlet. Not that bringing the project to life – and securing the funding for it – was plain sailing.
With more than 20 venue launches under their belts, Colin said Scotts at Largs, which comes eight years after Scotts at Troon opened, was perhaps their most challenging project to date.
“Everything – planning, funding – it all took four times as long,” he told SLTN last week. “Our bank, who we’ve been with for 30 years, said ‘no’ so we went to Clydesdale and they were supportive; they seem to be one of the few big banks that’s open for business.
“It was a leap of faith for us to invest that kind of money, especially in these challenging times.
“Every indication said, ‘no, don’t do it’. But when someone says ‘no’ that’s like a red rag to a bull for us.”
The Blairs’ determination was to serve them well throughout the Largs project.
Having bought the premises out of administration in March 2009, they traded it as Regattas until January of this year before closing the doors for the revamp.
Stripping it back to a shell, the building was enlarged with a flat-roof extension; preparatory work to allow the future development of the first floor was carried out; and an outdoor terrace was created.
Inside, the design brief was simple: to create three subtly distinct areas – restaurant, pub and cafe bar.
Working with the team at Glasgow-based Thr3 Design, who have collaborated on Buzzworks’ other venues under Thompson MacLeod, the Blairs set out to create a “glamorous and aspirational” interior scheme.
Aspects of Scotts’ ‘DNA’ – the use of natural materials like wood, the pebble wall and built-in fires – have been blended with bright, contemporary fabrics, stylish Italian light fittings and an ultra-glamorous bar and mirrored gantry.
Large curved booths run one length of the restaurant area; while fixed banquette seating extends in front of the large picture windows overlooking the marina, which is home to some 750 boats.
Smaller curved booths are located opposite the bar; while at the rear of the venue, the ‘pub’ area features a combination of traditional booth-style seating, a high bench-style dark wood table and chairs, and low-slung comfortable seating around a built-in fire.
To cater for Scotts’ seafaring clientele, a rear ‘mess door’, which leads directly into the pub area, features its own drying room.
Colin, who describes himself as a “frustrated interior designer”, said the layout and design of the 120-cover outlet appeals to a broad clientele.
“It sounds simple, but it’s about giving people what they want,” he said.
“People want glamorous, aspirational venues. I think there’s a direct relationship between spend and longevity, providing you spend the money wisely.
“We’ve probably spent double what we could have on some things here but it’s about giving people that ‘wow’ and a reason to come out.
“As well as other bars, you’re now competing against people’s homes, where they can watch X Factor, or whatever programme on demand, with wine and a meal deal from M&S. We’re not just selling food and drink, we’re selling an atmosphere that’s conducive to that.”
Subtle similarities with its sister venue are also evident in the food and drink offer. The same menu is in place at both Scotts outlets, although each has its own chef’s specialty section featuring dishes unique to that outlet. And there is common ground in the drinks offer, which includes a comprehensive wine list, premium spirits range, cocktail menu, and a broad selection of draught and bottled beer and cider.
Kenny said the food and drink offer had gone down well with customers during the first week of trading.
“We’re about 25% ahead of our most optimistic expectations but it’s only been a week,” he said.
“It would be easy to get carried away but we’re too long in the tooth. We’ve done 20-odd openings and we’re on our toes more now than ever before.
“In these challenging times, to invest that sort of money is a risk but it’s a calculated risk. You’ve got to know what you’re doing.”
Going forward, the Blairs reckon Scotts is a brand that could travel. But they admit they’re apprehensive about expanding too far – both geographically and in terms of the size of the estate.
“At the moment, all our venues are within half an hour of our base so we have control of it,” added Colin.
“The watchword for us is quality.”