GLASGOW bar the Hielan Jessie celebrated 25 years in business last week – by treating a select band of customers, family and friends to a slap up meal and a little bit of history. 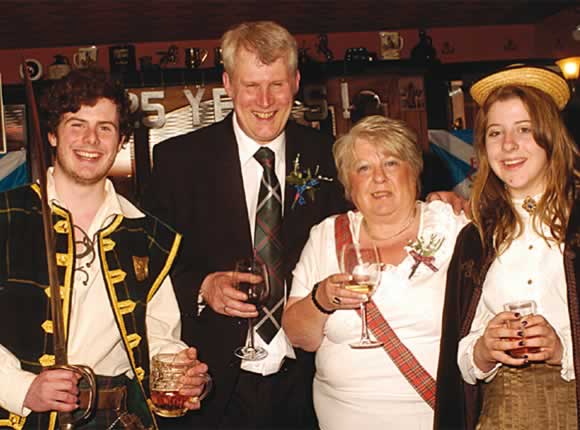 Owner Billy Gold, who formed a partnership with his father to buy the Gallowgate pub, held the event as a “thank you” to patrons and staff who have been loyal to the pub over the past two and half decades.
Guests enjoyed a three-course meal and a surprise theatrical performance: as the meal drew to a close an actor dressed in 19th century Scots military garb appeared and began recounting the true story of how Hielan Jessie became a Victorian heroine.
Billy told SLTN the legend stemmed from a native uprising against colonial British troops in India in 1887. The indigenous forces appeared to have the 71st Glasgow Regiment trapped, but the wife of Colonel Brown (Jessie) urged them to fight on after hearing the skirl of the pipes, signalling the approach of reinforcements from the 78th Highland Division. As the ‘soldier’, played by Peter Deeny, brought his story to a close, he was joined in the bar by ‘Jessie’ herself (Madeleine McKernan), who appeared in a vintage Victorian dress.
Gold said the ‘play’ and the event itself had gone down well. “The customers really loved it,” he said. “We had three or four people in who were there the day the pub opened and have stayed true to us since.
“The most important thing was to say thanks to our customers and our bar staff as well – one of the girls has been working here for 24 years.”