THREE single malts have been named the best in Speyside at an annual whisky festival.

Aberlour A’bunadh and The Glenlivet 18 year old, which are both part of Pernod Ricard’s Chivas Brothers whisky business, claimed the top awards in the 12 years old and under and 13 to 20 years old categories in this year’s Spirit of Speyside Whisky Festival Awards.
Glenfiddich 30 year old, part of the William Grant & Son’s stable, picked up the top prize in the over 20 years old category at the awards, which took place at Knockando Distillery on the opening night of the event. 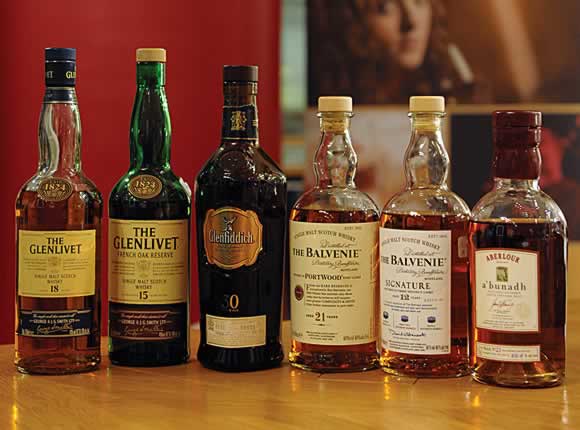 Now in its seventh year, the event aims to celebrate single malts created in the region.
Distilleries are asked to submit whiskies in each of the three categories ahead of the festival; entries are then judged by a panel of whisky experts before being whittled down to two finalists in each category. The winners are then chosen by members of the public during the first day of the festival and announced that night.
Festival chairman Jim Royan said more than 50 whiskies were entered in this year’s competition. “The Spirit of Speyside Whisky Festival attracts thousands of whisky enthusiasts from around the world each year who come to taste our whiskies, visit our distilleries and spend time talking about and learning about their favourite brands with other like-minded connoisseurs and experts,” he said.
“Speyside is known internationally for its wealth of quality malt whisky, and the Spirit of Speyside Whisky Awards gives us the opportunity to highlight some of the very best malts on offer in the whisky capital of the world.”
Neil Macdonald, global brand director for malts at Chivas Brothers, said it was a double celebration for the firm. “To win two ‘best of the best’ awards at this esteemed awards ceremony is exceptionally flattering and really highlights the popularity of our malts with whisky lovers around the world,” he said. “What is great about the Spirit of Speyside Whisky Awards is that ‘real’ consumers decide the winners – and ultimately these are the people who are buying and enjoying our whiskies.”