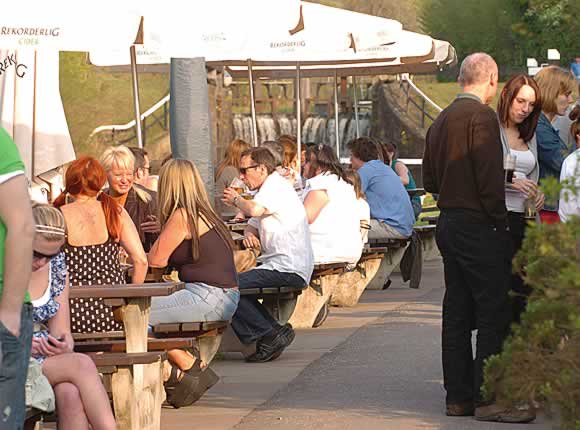 SOARING temperatures, a succession of bank holidays and the royal wedding have brought a little sunshine into the lives of operators across Scotland

After harsh winter weather decimated festive trade for many, the combination of sunshine and two consecutive bank holiday weekends, with an extra day off work for many as William and Kate tied the knot, prompted a much-needed boost for many pubs and clubs.
Unsurprisingly, those with outdoor areas enjoyed a bumper spell as the mercury rose beyond 20ºC.
The Oak Tree Inn at Balmaha, near Loch Lomond, experienced a record two weeks, according to partner Stuart Fraser. Located on the eastern shore of the loch, close to the West Highland Way, the inn’s 150-capacity outdoor area was busy over Easter and the following weekend, which was book-ended by the royal wedding and May Day bank holidays.
Stuart told SLTN business can increase by as much as a third when the weather is good.
“We didn’t put on any special events – to be honest if we had encouraged any more folk I don’t know if we would have been able to accommodate them,” he said. “We sold a lot of Corona and cider did well because it’s quite refreshing. Gin and tonics also sold well and rosé was strong.
“It was a lucky combination, the weather and the bank holidays. We had two record weeks, which was much-needed after the bad winter.”
Ayrshire-based Buzzworks Holdings, whose outlets include Elliots in Prestwick and Treehouse in Ayr, also reported a bumper fortnight, with its Scotts bar and restaurant at Troon marina achieving a record week’s trading over Easter.
Colin Blair, who runs the group with his brother Kenny and sister Alison, said there was a noticeable uplift in cocktail sales as the mercury rose. Buzzworks outlets also offered a selection of royal wedding-inspired cocktails.
“Easter weekend was particularly good for us and we’ve seen a nominal increase in sales across the company,” he told SLTN.
“Good weather creates a huge feel-good factor and venues with outside space tend to benefit most.
“After all the talk of doom and gloom it’s good for the trade to get some positive news.”
At Lock 27, next to the Forth & Clyde Canal in the Anniesland area of Glasgow, the 100+ capacity outdoor area saw no shortage of traffic during the recent sunny spell.
“Business was up, it was really busy,” the bar’s Adriana Verrecchia told SLTN. “We sold a lot of lager, cider and wine.”
The weather wasn’t the only positive influence on trade for some outlets. Alloa-based Maclay Inns, which has 26 pubs across Scotland, got behind the royal wedding with two of its outlets: The Rule and West Port Bar & Kitchen in St Andrews, where William and Kate went to university. Garden parties were staged in the outdoor areas at both outlets and customers could win prizes for dressing up as the royal couple.
Maclay boss Steve Mallon said the activity paid dividends, with the outlets performing better than during last year’s Open Championship at the Old Course.
The rest of the group’s pubs enjoyed a boost from the sunny spell, he said. “The weather coinciding with the holidays was a real bonus,” Steve told SLTN. “Easter was good but there was a bit of a conflict with the Old Firm game being shown on Easter Sunday. We did well out of it but we got one good day instead of two in some of our pubs where families chose not to go out on the Sunday because of the Old Firm.”
Glasgow nightclub owner Carlo Citti agreed. A royal wedding ‘stag and hen party’ at his 1000-capacity Campus venue on Sauchiehall Street was a sell-out but he said the Old Firm fixture impacted on Easter weekend trade.
“It was a shocking decision to put an Old Firm game on on Easter Sunday,” he said. “It’s a family day. With the bank holidays you get the Thursday but lose the Friday, then the Old Firm on a Sunday hits the Saturday night. It would be better being played on a Wednesday night.”