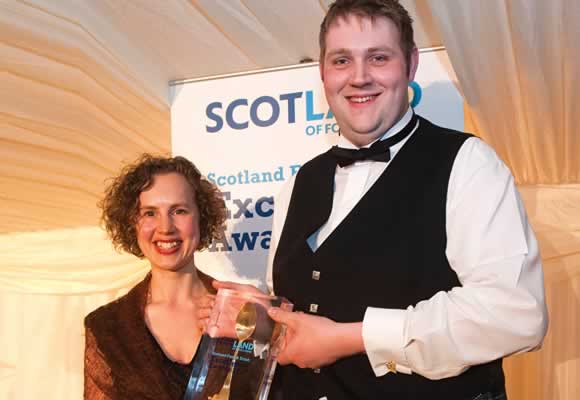 HIS culinary skill and passion for Scottish ingredients saw him crowned Scotland’s first ever Young Chef of the Year last year.

Now 24 year-old Alan Robertson, who has since landed a job with Albert Roux at his Inverness restaurant, is playing a part in selecting his successor.
Alan, from Elgin, has spent time this week at Martin Wishart’s cook school in Edinburgh delivering a pep talk to aspiring chefs as they competed in the final cook-off.
Speaking from Rocpool Reserve, where he is now working as a sous chef, in the Chez Roux restaurant, Alan said: “My main advice to chefs in that situation is to keep the head down, not to panic and go with the flow.
“Before I took part in the Young Chef of the Year last year, I’d had a lot of experience of competitions. The key is to practice a lot and just treat it like a day at work.”
The final cook-off for the award has now taken place, but the shortlisted chefs will have to wait until the Scottish Food & Drink Excellence Awards ceremony next month to find out if they have been successful.
Winning the award has provided a huge boost for the young chef, who started his career at the Sunninghill Hotel in Elgin when he was just 16. Alan then went on to work at the Craigellachie Hotel in Moray and the Glenfiddich Distillery in Banffshire before being offered the job with Rocpool Reserve. As part of his training with the Roux family, he will be working with Raymond Blanc later this year.
“It has opened new doors for me in many ways,” he said.
“The Roux brothers’ methods are the ones I have followed since the beginning. I’ve read all the books and even did work experience at Le Gavroche in London before I won the award. Being offered a job with them is a dream come true for me.”
According to Anna Davies, marketing manager for Scotland Food & Drink, Alan was an obvious choice as the inaugural winner.
“It makes us hugely proud to see what he has achieved in the past 12 months,” she said.
“Alan stood out right from the start of the judging process as he clearly had a genuine passion for Scottish produce and was fiercely ambitious – just what Scotland needs to keep it firmly on the world’s food and drink map.”
The Young Chef of the Year, sponsored by Scottish Food & Drink Fortnight, will be unveiled on Thursday May 26 at Dunblane Hydro.
Judges include renowned Scottish chef Martin Wishart, who will offer a work placement at his Edinburgh restaurant as part of the prize.