In last week’s Budget, chancellor George Osborne unveiled plans to cut fuel duty by a penny, delay the planned inflation rise in fuel duty until 2012, and scrap the annual one penny above the rate of inflation fuel escalator until 2015.
But microbrewers contacted by SLTN said the measures don’t go far enough. With many small breweries located in rural parts of Scotland, they say the rising cost of transporting beer around the UK and beyond is crippling business.
Angus MacRuary, managing director of the Isle of Skye Brewing Company, whose beers include Red Cuillin and Hebridean Gold, said fuel is the firm’s biggest cost next to staff salaries. It has a fleet of seven vehicles for direct deliveries between the central belt and Ullapool, and uses haulage companies for deliveries beyond that.
MacRuary said the Budget didn’t go far enough to help small businesses. “Cutting fuel duty by one penny is nothing at all,” he told SLTN. “On the island [Skye] it’s £1.51 a litre for diesel and we do hundreds of thousands of miles a year. Fuel is a real killer, it’s crippling. Tourism is the number one industry in the Highlands and islands and our brewery shop is very popular with tourists – the worry is that the ridiculous fuel prices will stop tourists travelling here.”
Fergus Clark, managing director of Inveralmond Brewery in Perth, whose beers include Ossian and Lia Fail, said the measures outlined in the Budget haven’t allayed concern over fuel prices. “The one penny a litre cut in fuel duty doesn’t amount to anything in the grand scheme of things,” he told SLTN. “And I have doubts over whether we’ll ever see it passed on at the pumps. “We’ve got four of our own vehicles and we also send our beers across the UK and export; we’ve seen quite a significant increase in export costs.” 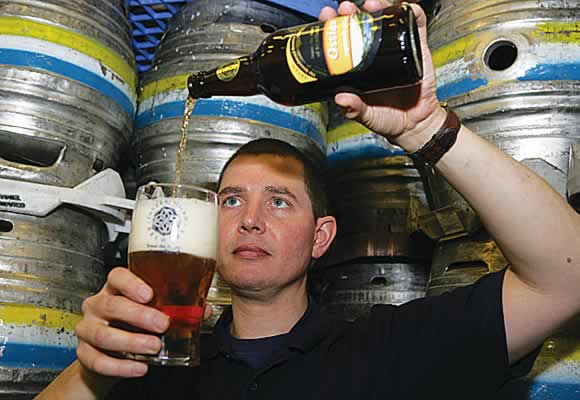 Clark: fuel duty cut will be of little help.

Meanwhile, drinks producers and trade bodies have slammed the government’s decision to continue the 2% above inflation duty escalator.
The Wine and Spirit Trade Association said the increase, which equates to a 7.2% rise in duty on wine and spirits, will squeeze family budgets, adding 15p to a bottle of wine and 54p to a bottle of spirits.
“With close to two million jobs supported by the [drinks] sector, the chancellor has missed an opportunity to help it play its part in the UK’s all-important economic recovery,” said boss Jeremy Beadles.
Diageo said it was “disappointed” the government had stuck to the escalator. “This means alcohol duty will have risen by almost a third in the last three years,” a spokeswoman said.
The duty increase was also slammed by the Scotch Whisky Association, but it did welcome other moves in the Budget. “The changes promised to corporation tax and increased support for manufactured exports will allow distillers to invest for long-term growth in overseas markets,” said SWA chief Gavin Hewitt.